A grim year took on a new tune for pianist Angela Hewitt after she acquired a new bespoke grand. 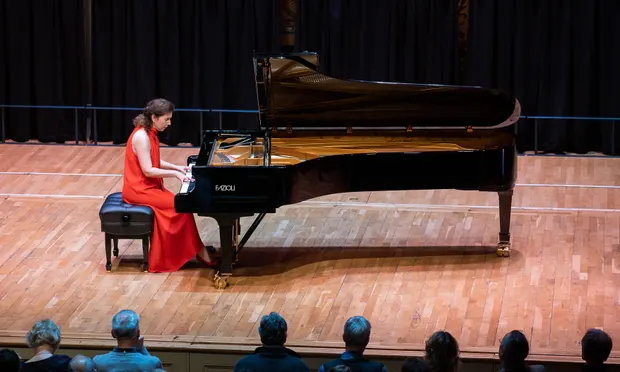 One of the world’s most celebrated pianists has described for the first time how she got over losing a piano she described as her “best friend” by receiving its replacement.

Angela Hewitt played for the first time using the new piano at a concert in Leipzig, streamed live on ARTE Concert, after becoming the first female recipient of the Bach medal in November, an honour awarded in recognition of efforts to promote the composer’s work.

Hewitt has also completed a 15-year project involving recording all of Beethoven’s piano sonatas, and a recording of one of the composer’s greatest piano works, the Hammerklavier sonata.
Virtuoso mourns beloved £150,000 piano smashed by movers
Read more

She had feared she might never find a piano up to such a task after her unique four-pedal Fazioli was dropped in January by specialist instrument movers and smashed beyond repair. Losing a piano on which she had made all her recordings since 2003 left her in mourning. “It was my best friend,” the Canadian virtuoso said at the time.
Advertisement

In despair she called the piano’s maker, Paolo Fazioli, who assured her he would build a suitable replacement.

While she waited, she had to endure cancelled concerts because of the UK coronavirus lockdown, her principal residence being in London. Hewitt said she managed to stay sane by posting daily Twitter videos of herself playing easy pieces on her practice piano in her flat, and said the phone videos – some of which were viewed more than 140,000 times – provided a new way of connecting to a mass audience.

“Unlike [the late Canadian pianist] Glenn Gould, who was very happy not meeting people, I actually love audiences so I’m glad I did those videos. It was a hard period for everyone,” she said.

In his factory near Venice, Fazioli and his team built five new grand pianos in the hope that Hewitt would choose one. “The preparation of those five pianos put the whole factory in turmoil,” he said. When they had finished and travel restrictions were lifted, Hewitt flew to Venice at the end of July.

The five pianos were lined up in a concert hall next to the factory. Hewitt’s German tuner and technician, Gerd Finkenstein, sounded them out.

Hewitt rejected three of the pianos within minutes. She said that the two remaining were “twins”, made more or less at the same time with consecutive serial numbers. Within 25 minutes of playing Bach, Beethoven and Schumann pieces, she picked the older twin.

“Playing it made me feel I had the world of sound at my fingertips. It had no harshness no matter how loud you played. It has a huge sound but also great delicacy and range.”

It was the piano Finkenstein knew she would choose, though he had not said so beforehand.

Did the piano turn out to be her new best friend? “I guess it is. Sorry old one. Not that I’m promiscuous. I’ve just recorded Gershwin’s Love Walked In. It was a magic moment. I have a new piano and a whole new world. Everything I give to it, it gives back and more, so I can really play the way I want to. It’s a wonderful feeling.”

She added: “Some consider pianos feminine, but I think of them as more masculine. If it’s going to be a best friend, lover, it has to be a man.”

Getting the new piano was the happiest moment of a grim year, she said. “In a year where so much of my work just disappeared and so much of my time was alone in isolation, I do have that one very, very, happy thing.”

When her former piano was broken, Hewitt feared an “insurance saga”. But she said it was all settled with dignity: the movers’ insurers picked up the €155,000 bill for the new piano. “I wasn’t angry with the movers, but let’s say I’ve changed movers,” she says.

Asked if she got tense when the new piano was being moved, she said: “I try not to think about. It’s more tense for the movers. They know they better not drop it.”